Sample Citation for US Federal Legislation 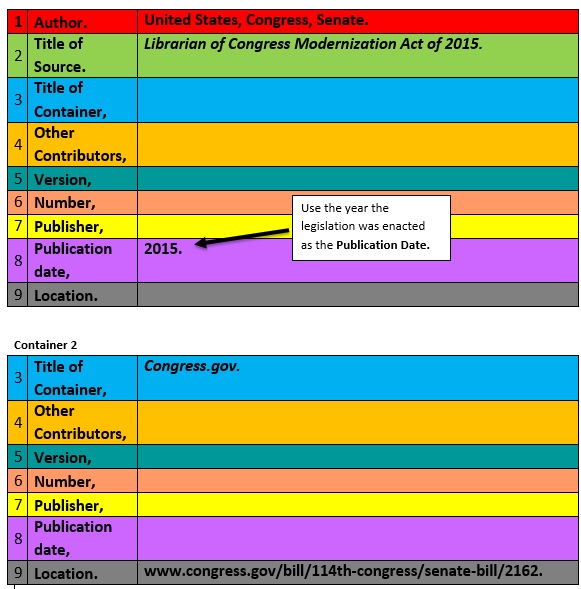 Sample Citation for a US Supreme Court Case 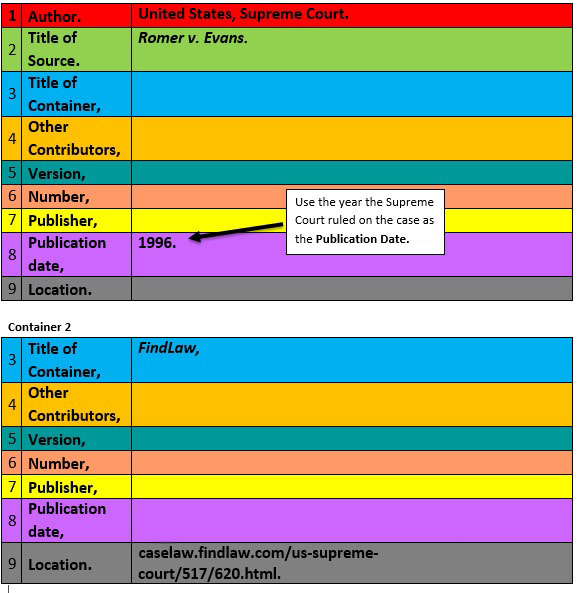 Legal and Legislative Sources in MLA

Here are some guidelines for citing laws, acts, US Supreme Court cases and other political documents in MLA.

For published US government reports, see the section on Reports from Corporate, Government & Non-Governmental Organization Authors on the Common Web Resources page of this guide. If you have any questions, ask a friendly librarian.

The Declaration of Independence and the Constitution

According to the Georgetown University Library, it is not necessary to cite the Declaration of Independence or the Constitution in your Works Cited as they are such well known works. You must cite them in your text.

Here is how the Georgetown Library recommends citing them in-text:

The first time you mention the Declaration of Independence in your text, add the institutional author (US) and date (1776) in parentheses.

Example: The Declaration of Independence states that the government's "just power" is derived "from the consent of the governed" (US 1776).

When you refer to the document after that, you can omit the (US 1776).

When you are citing the U.S. Constitution, if you are citing a particular section of the document, you should mention the specific article, section, and clause in your document. There is no standardized method provided by the MLA, so the Georgetown Library recommends the following methods.

Example 1:  The Constitution of the United States, Article I (sec. 7, cl. 1) dictates that all revenue bills must originate in the House of Representatives.

Example 2: The U.S. Constitution (art. 1, sec. 7, cl. 1) dictates that all revenue bills must originate in the House of Representatives.

Because we are a high school, the GBS Library recommends keeping entries for these types of legal resources simple. If you wish to include the bill number and the number of the Congressional session, place them at the end as you would any Optional Elements.  See MLA's website for more information on citing legal sources. If you are interested in more sophisticated legal citations, MLA recommends consulting the Chicago Manual of Style.

Key things to keep in mind:

Do not italicize the titles of laws, acts, or similar political documents or put them in quotation marks. Capitalize them as you would any other source title.

When citing government entities as authors, begin with the largest and proceed to the smallest with commas between them:

Format for Federal Bills (on the Web):

When citing several entities from the same government in your Works Cited, substitute three hyphens for each entity listed previously:

Executive orders, which are actions issued by the President and have the force of law, have become more common in recent years. Because we are a high school, the GBS librarians recommend omitting the Executive order number and using only the title. Executive orders are not italicized.

Format for Executive Orders (on the Web):

Unlike laws, acts, and executive orders, the names of court cases are italicized:

Brown v. Board of Education of Topeka

Format for US Supreme Court Decisions (on the Web):